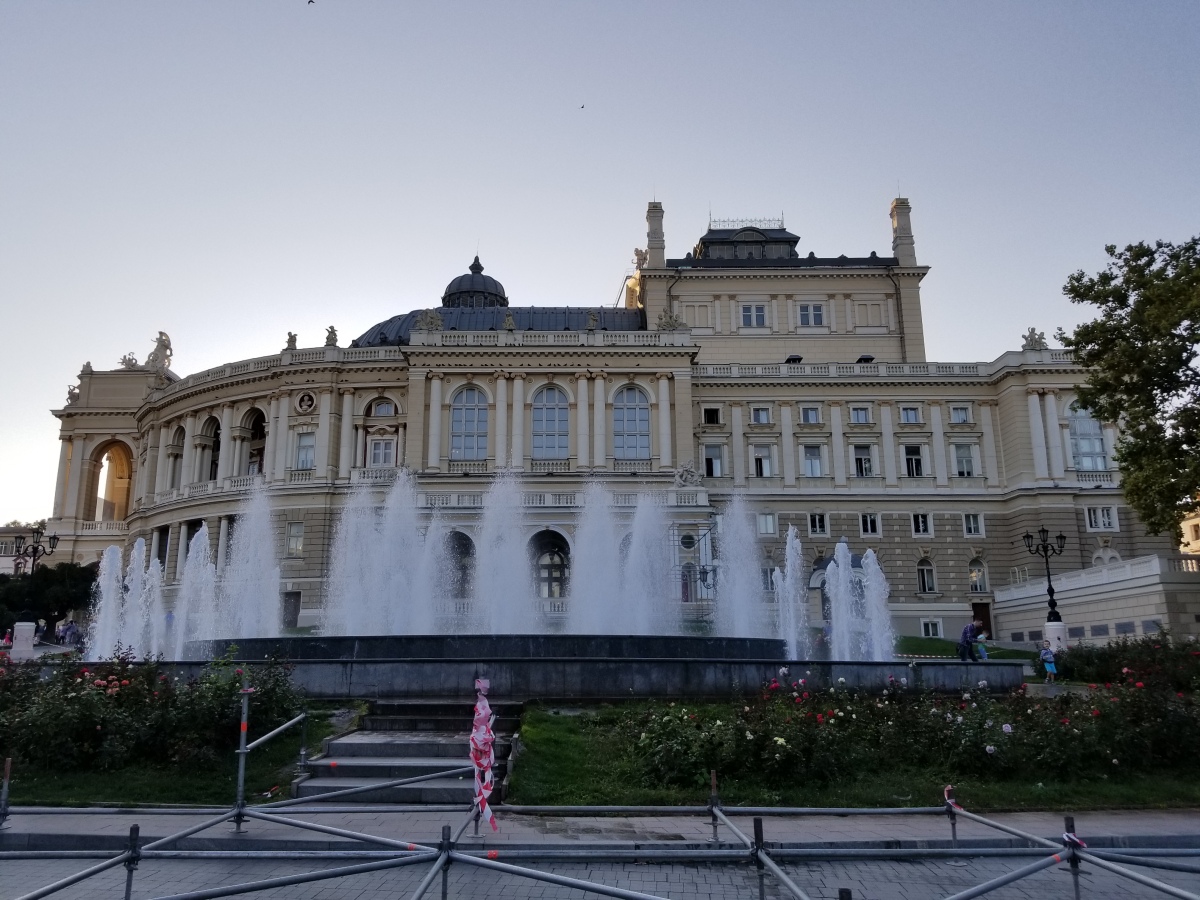 Over the past week and a half, I’ve had the honor and privilege of traveling to several Eastern European countries to meet with people who are involved in religiously-themed queer protest art. They have generously made time to meet with me, shared meals and insights, introduced me to their friends and collaborators, showed me around their cities, and generally helped me to understand the cultural, political, and religious contexts of their work. Although this trip is part of a larger project, a follow-up to Queer Nuns and an initial foray into sorting out the focus of my next book project, here I offer a bit of an academic travelogue in order to share some of what I’m learning and to bring more attention to the exciting work these folks are doing. There are four post(cards), one for each city in which I conducted research: Bucharest, Romania; Odessa, Ukraine; Prague, Czech Republic; and Poznań, Poland.

Although the Odessa region, with its large natural harbor on the Black Sea, has seen human use for millennia, it only became an established city in the nineteenth century. Much of the architecture therefore dates from that period, with some newer development in business and tourist centers. Up near the opera house, at the top of a hill overlooking much of the harbor, the buildings are painstakingly maintained, painted in the brilliant colors that would have originally graced their walls and surrounded by well-kept grounds and fountains. Trendy restaurants, karaoke bars, and beauty salons line the streets. Save for last year, when local violence between pro-Russian and pro-E.U. groups kept tourists away, the Russian annexation of Crimea has significantly benefited Odessa’s tourist industry. Down at the beachfront, tiny hotels compete with high-rise affairs and restaurants print their menus in Roman script as well as Cyrillic. Yoga classes take place atop old gun turrets, next door to hole-in-the-wall cafés, all taking advantage of the sweeping Black Sea views up on the bluffs. 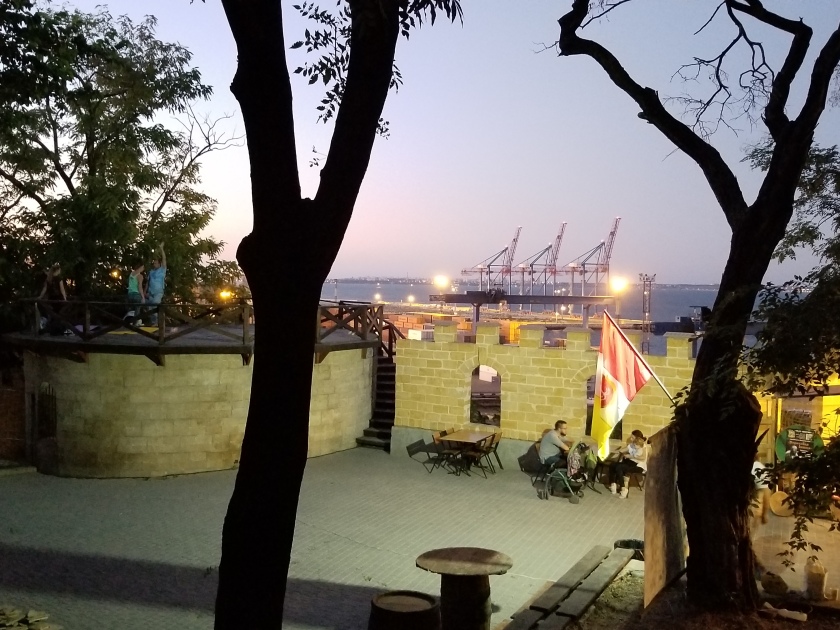 The tourist industry, and the city as a whole, are clearly rebuilding, and the rebuilding is clearly still a work in progress. Attractive beach hotels stand side-by-side with shuttered, dilapidated buildings that were formerly restaurants or bars. Just blocks past the well-restored areas stand equally historic buildings gone black from decades of soot, crumbling on the outside or abandoned altogether. Wealthy-looking exurban developments are visible from an incoming plane, and the airport lobby is plastered with ads from shipping companies seeking employees in this major, and now E.U., port city, yet the airport’s shiny new terminal is still under construction and the runway feels mildly terrifying when the plane is traveling at high speed.

Vlad, my contact here, tells me that the revolution of three years ago has brought positive changes for LGBT people in Ukraine – or what remains of it – despite ongoing concerns about Russian aggression. E.U. membership required that certain human rights protections be set in place, including for LGBT people, and there has been E.U. financial support for LiGA, the organization for which Vlad works. The oldest LGBT organization in Ukraine, LiGA has its main offices in Kiev and satellites in three other cities, including in Odessa. There are other LGBT organizations in the country, including an organization of LGBT Christians whose representatives were traveling to Bucharest for the Eastern European LGBT Orthodox Christian gathering at the same time as I was traveling to Odessa. Things still aren’t easy – there are no laws against anti-LGBT hate crimes, and although anyone who violently attacks an LGBT person can of course still be prosecuted for a violent crime, all too often the police threaten victims with public exposure if they pursue the charges, and a specific city or regional chief of police can still make all the difference in terms of police friendliness and response. The most recent Odessa pride parade was stopped by police and the participants sent home, ostensibly because of the strength of the counter-protests. Yet some people are open with their natal families and their friends, and the LGBT community has allies among both everyday people and national politicians. The number of gay bars in Odessa is down from three to one right now, but there’s no indication that it won’t go back up. And in contrast with the impression given by the often two-dimensional press coverage of Ukrainian politics in the U.S., pro-Russian people in Ukraine are not necessarily politically reactionary. This is, after all, a Russian-speaking, mostly ethnically Russian region of Ukraine, and identifying with Russia no more implies supporting Putin than identifying with the U.S. implies supporting Trump.

Religion did not feel as omnipresent to me in Odessa as it did in Bucharest. Some of that may be due to chance, since on the drive to my hotel from the Bucharest airport the driver crossed himself every time the car passed a church; the same didn’t happen in Odessa. But we also passed far fewer churches on the drive. Like Bucharest and Prague, Odessa has synagogues still standing from before the Holocaust, some with re-initiated congregations and some repurposed to other uses. It also houses a stunning mosque and Islamic cultural center that were completed in 2001.

Ukraine had, for a brief period of time, a mission (a house in its beginning stages) of the Sisters of Perpetual Indulgence. When I’ve mentioned this to people – Sisters or not – outside of Ukraine, I’ve often been met with mild incredulity and the assumption that the mission was unable to become a house because the political context was just too conservative and unstable for such openly and visibly queer activism. But Vlad told me of catching a taxi in habit, along with other Sisters, and one Sister even appeared as a back-up singer on Ukraine’s version of the music competition show, The X-Factor. No, it was an all too Sisterly reason that took the wind out of the sails of the Odessa mission: interpersonal disagreement about the true purpose of the order and the tendency of smaller houses toward unforeseen autocracy. It remains to be seen whether the remaining members – now former members – of the Odessa mission will manage to find the energy and the will to regroup as so many others have had to do in the aftermath of a house’s implosion. Should they do so, it seems they will continue to find a welcome in their community.

Melissa M. Wilcox (any pronouns) is Professor and Holstein Family and Community Chair of Religious Studies at the University of California, Riverside. Dr. Wilcox is the author or editor of several books and journal issues, and numerous articles, on gender, sexuality, and religion. Dr. Wilcox's books include Coming Out in Christianity: Religion, Identity, and Community; Sexuality and the World’s Religions; Queer Women and Religious Individualism; Religion in Today’s World: Global Issues, Sociological Perspectives; Queer Nuns: Religion, Activism, and Serious Parody; Queer Religiosities: An Introduction; and (with Nina Hoel and Liz Wilson) Religion, the Body, and Sexuality. Dr. Wilcox is currently working on a new research project on religion and spirituality in queer and trans leather and BDSM communities. View all posts by Melissa M. Wilcox

It’s part of both academic ethics and feminist praxis to acknowledge your sources. But footnotes and blogs don’t really go together, so this sidebar is a general expression of gratitude and indebtedness to the many thinkers, writers, artists, and activists who’ve influenced me over the years.

The most important, for many years, have been womanists, feminists of color, and queer people of color. Liberationist thought more broadly has also been important to my work, as have those threads of Marxism that consider religion in more complex ways than Marx himself was willing to do. I’m learning more from trans theory and trans scholars each year. I’m powerfully drawn to disability theory, particularly from folks who bring it together with feminist and queer theory. And I’ve learned from and worked alongside feminist, queer, and trans thinkers of all races, ethnicities, genders, generations and ages, abilities, and nationalities, both within and – equally importantly – beyond the academy.

My work is often a reconsideration of or a different angle on existing approaches to the problems I’m considering, so it couldn’t exist without the wisdom and provocations of those who have taught me – both those who’ve cleared a path in the academy for my own work and well-being, and those for whom I’m attempting to clear a path in turn. If we don’t let our students as well as our teachers teach us, we are doomed to stagnation.